In my earlier post this morning I briefly announced and began some discussion and analysis of the new Mists of Pandaria cinematic.  I didn't have enough time to go into detail so I'll do it now. As always the CG quality is up to Blizzard's usual level of detail to the point of being practically photorealistic but with a certain 'fantasy' feel. I am not going to uphold it as a cinematic work of art as it relies on many tropes and cliches, but most of them it handles nicely. Comparing it aside the other WoW cinematics I actually would rank it highly because of well thought out use of subtext and content, but it does have some glaring flaws. I have relinked it below and there I go into analysis.


So here we have it, coming in at a full 40 seconds longer than the Wrath of the Lich King cinematic, making it the longest thus far. Because Apple Cider Mage has done an in-depth analysis of the gender depictions (or complete absence of a female presence) in the video I won't go into too much detail on that front. Suffice to say, her critiques are spot on, but I do not think they doom the video.

I should also say that this video really isn't doing anything to dispel the concerns that Blizzard is ripping off Kung Fu panda...and off we go!

Why do we fight? Because its fun when no one actually dies...because we want cool loot? I get why the line is in there, trying to channel the inner Blizzard zen-masters to provide us something akin to a koan and a little Panda philosophy...and yet it felt so generic and cliche that it fell on its face.

First off we have the image depicting the Horde and Alliance in their struggle; endlessly locked in a conflict that is dragging them both to the ground...or to the bottom of the sea. A nice example of showing rather than telling...while it may not be too subtle, its far better than the narrator telling us about some war.


Here the two ships have sunk each other, foreshadowing the upcoming "change" in the storyline and subtly reinforcing just how fruitless and destructive the war between Horde and Alliance is. Later on, as I will discuss, this is juxtaposed aside the relatively peaceful nature of the Pandaren...and also hints at....

Ok you are safe now!

I mentioned Apple Cider Mage earlier and while I think she has valid points about the overhyped masculinity in the video, I will commend Blizzard on one factor: the male orc and human actually have the same body as their in-game representative, keeping a certain consistency...but this is not a complete accolade, and glosses over the fact that the depiction of the human is clearly way over-built.


On the other hand, the video is wrought with symbols and tropes; the Alliance sailor and Orc warrior are images of the Alliance and Horde that are as old as Warcraft 2. (Really, down to the red, one-pauldron orc warrior). They even show their stereotypes in more subtle ways. The human's first thought is to MAKE something, a spear from an oar, while the Orc's first thought is on getting up and moving forward. I am not going to defend the lack of updating to the modern era with regards to gender isues, but I will note that it is not like these images are a "new" thing to the Warcraft universe.

So onward we go; the human has sharpened his own little spear and they have their little duel...which I found a little odd. Not so much because of the dual, but because of the way they moved...the human's lunge (at 1:43) has a "weight" to it but the way he moves looks unnatural because of his upper-body bulk. Course this does not work out well and he ends up kicked into....

..er....a bell! Something that has been done to death in kung-fu movies...if there is a bell nearby, someone will get kicked into it during the fight. The seemingly equal matched duel is suddenly broken up by the arrival of the mysterious stranger and another trope!

They fight on as they discover their new opponent...the bamboo staff immediately becoming the symbol of Pandaria supporting and re-inventing these waring factions. But the plucky adventurers get a blow in!

Rule of all fantasy/kung-fu: damaging someone's awesome headgear immediately makes them more skilled and dangerous....turns out in fantasy, anger doesn't cloud judgment...or perhaps this panda is talented enough to channel that anger into ability. A few more blows are exchanged from Panda's new-found "badassery" and we come to my favorite scene of the entire video.
This scene I actually think was well done because it tells you a great deal without having to do very much. First we have the Panda taking the "hammer"-incense-thingy from the Orc and putting it back where it belongs..."Hi, I am a panda, I can fix this." The "nonchalant master" is a common kung-fu movie trope and something everyone who's seen a Jackie Chan movie is familiar with...the kung-fu master who fights while balancing the Ming Vase that's teetering over...or fights with his pupil over a dumpling (see the Kung-fu Panda similarity?). What it is meant to convey is just how agile this character is...he can instantly adapt to his situation, but also cares about his surroundings and is so good he can fight an opponent while considering it all.

Using the staff to tweak the balance is just a nice bit of humor but also puts the staff across his body and reinforces the next statement he makes "Bring it on." A direct challenge...anything they break, he can mend...breaking stuff is fruitless.

So in one small scene we've shown the Alliance/Horde that their war is pointless, that the pandas can show them the way, that THIS panda is badass and cares about restoration, AND that the Horde/Alliance should put down their weapons.


Then the human hands his oar-spear over to the Orc. Think about this...a new enemy has shown up that is clearly more powerful than Horde and Alliance (as stated previously, the two characters are basically perfect stereotypes of their factions) and they have to work together to face it. For a brief moment the two realize that their fighting each other was futile and useless...and the Panda has taught them that.

Bolstered by this new union, the two attack and promptly get taught a lesson about under-estimating a Panda, who's staff spinning looks like it was basically modeled from a Jet Li movie (I am 99% sure that I could find a nearly identical move in a movie of his). Included is more proof that this Panda is merely toying with them, what with how he almost looks like he is just playing when he fights with them. All while the mist is clearing and the sun is coming out; and right as it comes out the two factions have that revelation of their hubris and humility appears on their faces for the first time. The sun of new thinking has washed away the mist of conflict. 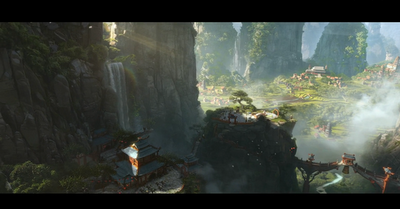 Then we get to see once more that Blizzard's animators know how to make a pretty vista...which I understand is blatant Orientalism and yet somehow I love it.

We end with the reasons we fight, which I still think are cheesy and cliche but fit the passive Pandas well enough. Really, he says that they fight out of necessity...it is a roundabout way of saying "If you desire peace, prepare for war."

Email ThisBlogThis!Share to TwitterShare to FacebookShare to Pinterest
Labels: Mists of Pandaria, WoW