[Review] On Genocide (of Orcs)

\A week ago now Orcs Must Die 2 came out on Steam; having finally gotten around to playing the first game over the preceding weekend (which I enjoyed) and being without any other games currently occupying my attention, I dove on it (and at $15 it was worth it!). I would fully recommend it to fans of action games or tower-defense games alike...or heck, to anyone who enjoys gaming. My commentary after the break

Given that the first Orcs Must Die game was released in October 11, 2011 and Dungeon Defenders released on October 18, 2011 it is hard not to draw certain parallels to them. While Orcs Must Die was in my opinion more engaging and active, Dungeon Defenders had 4-player co-op and more total content (and has been updated with new DLC on a seemingly weekly basis since release). This sort of "review" will compare the two in many ways but I think both are fantastic games.

So we have Orcs Must Die 2 (OMD2) being more or less a tower defense game in which the player takes the role of either Sorceress or Warmage. Unlike most tower defense games you'd find on Newgrounds or an App Store, OMD2 heavily involves the player in the action. While you can play without using a single weapon, I would consider it foolhardy since inevitably the waves of Orcs will bleed one or two through your defensive line. I actually consider this one of its strengths; I always found it frustrating that the "avatar" in games that did have one would often become more or less a bystander (a frequent issue in Dungeon Defenders unless you play specific classes) who might peck away at the enemies like a determined cotton-ball.

In any mission the player gets to carry up to about 12 of the 50+ items which vary from traps (like sticky tar on the ground, arrows from the walls, or archers), weapons (a magic hammer, wand, etc) or trinkets (which usually give you some sort of passive buff like increased mana, and can be "activated" for a more powerful temporary effect). In fact some very successful strategies involve using various items to make the player rather dangerous, with traps being there mostly to hold the tide back while the player mops up. These items can be "upgraded" by spending "skulls" which are earned by beating levels, earning achievements. Put simply one will earn plenty of skulls just by playing the game...and if you dislike your purchase, you can respec them between missions. I'll go more into this later one.

Furthermore, an improvement over OMD, OMD2 allows for two-player co-op, with each player getting half the normal number of traps and money (split evenly between them). So far it is one of the more fun games I've played in the past twelve months...with each co-op partnering often resulting in amusing combinations of traps and entertaining Ventrilo conversations. While this is fewer than its main competition, Dungeon Defenders, I often found that in DD the way the game was set up often meant that certain classes (Squire, EV and Apprentice especially) end up placing the majority of the traps because they are more effective. In OMD2 both characters bring some interesting tools to the equation, and if one of you is building for traps, the other can support and focus on weapons.

So as I stated before, the items/traps/weapons in OMD2 are upgraded by spending "skulls". The upgrades cost somewhere between 5-15 skulls and a person can get anywhere from 1-24 in  a single game (usually I see around 5-9 after an initial clearing, maybe 15 or so when clearing the story). By the time you complete the game the first time you should be able to fully upgrade most of your preferred loadout. With 50 or so items in the game there are millions of combinations to try. Each item feels useful, though some more than others, but even some very strange builds have worked (in my experience).

I hate to beat the snow-covered dead horse, but this feels like what Diablo 3's character system SHOULD have been. Plenty of abilities to choose from with their own upgrades (for example in OMD2 with the Arrow Wall trap, players can choose to have the arrows be either Fire or Ice, but can only have one at a time) with the ability to respec quickly and fluidly should the build you tried not work out. While to be fair the OMD2 characters only have 5 unique items each (the other 45 or so are shared), they could easily expand on this, and having individualized sets of abilities can still work. Most of the unique upgrades also feel very competitive...often requiring you decide based on the level/strategy you are going to employ.

The system certainly lends itself to potential expansion, and if they ever choose to release a toolset it would fit the Steam Workshop perfectly.

Anti-Story is the new Story

It seems to be the new "thing" in fantasy to play on the existing tropes and mock them.  This is another place OMD and Dungeon Defenders are similar; but I think Dungeon Defenders takes its story a tiny bit more seriously...just slightly. The irony is that this is becoming so common that the "anti-fantasy" is starting to become a more tired trope. Both the main characters of OMD2 are meant to more or less poke fun at some existing fantasy tropes. The Apprentice Warmage, or "Bromage" if you peruse the developer's forums, is basically the stereotypical fraternity guy ported into a fantasy realm and handed a sword. He plays the part of the buffoon, though it does enable one of the better quotes from the first game.


"The Sorceress vowed to teach us [warmages] a lesson, fortunately for us, my apprentice cannot be taught." - The Master Warmage

Meanwhile the Sorceress is basically every female evil wizard trope you can imagine: wears little clothing (except for her last outfit which requires beating the game on the hardest difficulty to earn, see below), mind-controls, uses "clever" tactics, wields a wand, dark hair, arrogant. I am reasonably sure she is meant as bait for Anita Sarkesian. 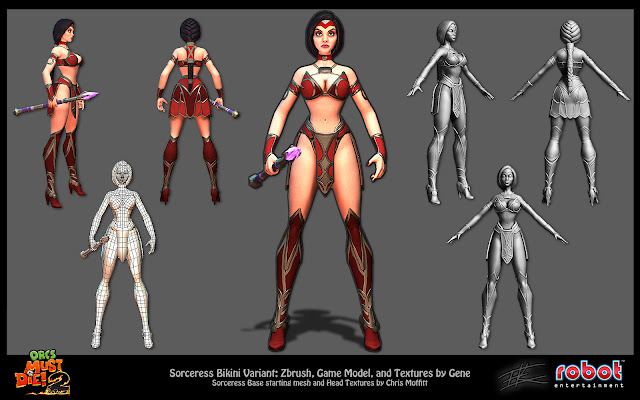 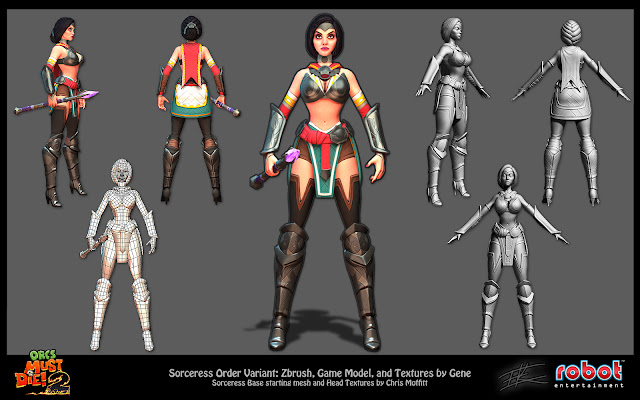 However in the context of mocking fantasy tropes it seems almost acceptable...except that the game somewhat ignores the Sorceress's lack of clothing. If the game had made some jests about "bikinimail" as much as they made jokes about the Bromage being an idiot or the Sorceress being crazy, the bra-armor might have come off a little less like gratuitous fanservice. Once I obtained the last armor variant (the bottom of the three above) I ended up wearing it primarily (look at me up on my high moral horse!) because it does look more dangerous, though I think Diablo 3's demonhunter would like her shoes back.

The story overall is lighthearted, but really you aren't going to play this game for the story, it is just there to add a little context to what you are doing. You are here to kill orcs, so set down another tar pit and get to splattering.

This is perhaps one of the few main points of contention. Owners of the original Orcs Must Die get 10 levels from it in OMD2, reworked with the new monsters and character. In a sense it is a "day one" DLC, but is meant to reward existing customers, and nothing prevents a person from dropping a few dollars to get OMD.

This DLC occupies an odd place: in a sense it was "day 1" in that it was finished and apart of the game. However it was "already" in existence in the sense that the maps existed in OMD. Because I am one of those people that already had OMD I got the maps without much cost (I'd purchased OMD a while back during a Steam Sale), and I find I don't mind this system but were I on the other side I might be a little less lenient.

The other issue is that the two characters do not feel as balanced as they could be. The Bromage has an "always on" trap called the Tar Pit, which significantly slows enemies that tread through it, while the Sorceress's equivalent is an Ice Trap that freezes whoever walks over it...except it has a reset time after firing. By and large I found it easier to complete levels with the Bromage. That said, the game's focus is co-op, and most levels appear to have been designed with two players in mind.

I highly recommend this game. Despite all the criticisms I levied above the game is hours of fun, easily worth the release day purchase. Not only that, the game was a mere $15 which these days is barely the price of a few maps in a Call of Duty expansion. I am happy to support an indie developer after all. Here is to hoping they continue to support it after release, more characters/traps/items would be welcome...or go with my suggestion earlier and enable Steam Workshop.

Posted by Clockwork at 3:20 PM

Email ThisBlogThis!Share to TwitterShare to FacebookShare to Pinterest
Labels: Review