I've hit that awkward time in WoW's cycle when the current expansion is coming to an end and all I really find myself thinking about is the upcoming one. I find it hard to feel motivated playing systems I am not happy with when I know something new (and hopefully better) is right around the corner.

In anticipation of that I'm doing a few little posts on what I see coming down the pipe for the classes I play (which is most of them)...and first, DEATH KNIGHTS. To keep it from being ghastly long I am splitting it into 2 parts (15/30/45 and 60/75/90). Also, I am not much a fan of WoW PvP at the moment so this analysis is aimed at the PvE game, but my opinion of PvP may change in Mists!


Level 15
For the first tier we have the three "spread your diseases" talents that are apparently meant to supplement Outbreak (clearly Icy Touch and Plague Strike are starting to feel like they're heading towards the chopping block, but at least Blood Strike is still around!) 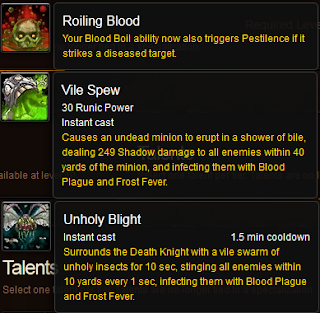 Blood: For tanking, since I tend to open with Outbreak and it has a short cooldown, I would want to go with Roiling Blood. This is because I tend to use Blood Boil as a "quick" AoE threat grab, and having it spread diseases is all the better. I see no equivalent to Crimson Scourge in the current talent trees but even then, I find it will be the easiest to just occasionally spam Blood Boil to ensure maximum disease uptime.

Unholy:  I would take Vile Spew...and while it is clearly going to have some issues with breaking CC (diseases on everyone within 40 yards!?) I think it is too fun looking to pass up. Not to mention that because Vile Spew only has a RP cost, it will be easy to just use it as needed to spread around diseases and damage. The other two specs don't see much use out of Vile Spew because it would be limited by Ghoul uptime (1 minute out of every 3 at best and Blood wants to hold onto it as an emergency heal)

Frost: Here I take Unholy Blight because while it has a 1.5 minute cooldown, it is a fire-and-forget and costs no resources. Between this and outbreak I should only occasionally have to re-apply Blood Plague...that and it's a swarm of BEEEEEEEEEEEEES at my command.


Level 30
I see the second tier as basically the "Utility" tier, though some of these analogue well to PvP. 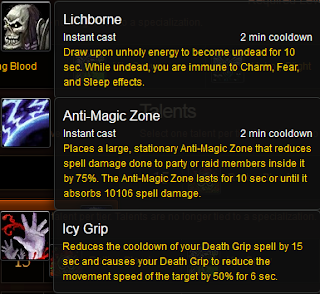 Blood: This tier is a little bit trickier, and will depend mainly on the final numbers for AMZ. At level 30 an absorb of 10k damage is quite high, and it that scales well with level and gear it can mean a useful raid cooldown. Icy Grip is also enticing since Death Grip is just fun to use and sometimes you need taunts quick (Hi Ultraxion trash!), plus a slow never hurts. Lichborne I am not as enthusiastic, because to make full use of the Lichborne + Death Coil effect you need to plan ahead which can often mean sitting on runes unnecessarily and losing overall mitigation. Personally, I'd take AMZ, I think it will be the most useful in a raid setting.

Frost/Unholy: For these I take the same approach, I'd go with AMZ as a raid-cooldown, or just a personal defense if needed.


Level 45
This tier is also somewhat geared towards PvP with Death's Advance, but my impression of Blizzard's design philosophy in Mists is that they would like to see CC play a larger role in PvE content, and thus I think these might be more relevant. 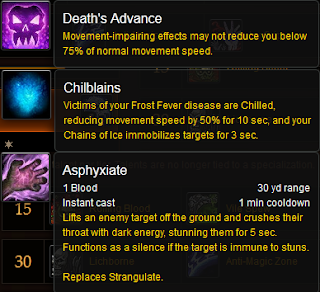 Blood: I find that unless Blizzard institutes some aggressive movement slows in Mists that I won't find Death's Advance interesting, so my choice comes down to Chilblains or Asphyxiate....which is mainly "Everything I touch gets slowed by 50%" v.s. "Hammer of Justice, Darth Vader Edition". Really both of these will depend on how much CC sneaks into PvE. Assuming that both will be effective at least on smaller monsters and trash, I find this to be among the most interesting choices.  On the one hand Chilblains means an easy time kiting, and it was a godsend during the Magmaw fight (I could run around as frost with the worms chasing me while my raid was free to focus on the boss, made the fight a walk in the park). On the other hand, a stun is always handy (I am ignoring the "interrupt" because Strangulate, which Asphyxiate replaces, still has that feature) but it would cost a rune. I think for now I favor Chilblains; there is a certain advantage to being able to have everything in a Blood Boil radius slowed for 10 seconds.

Frost: Because Chilblains works off of Frost Fever, and because of the utility I mentioned before I could see Howling Blast becoming a potent AoE slow. However as Frost has such a high alpha strike it is common for me to swipe a mob off the tank. Combine that with the fact that Frost is almost all Death runes it means I will frequently have one to use for Asphyxiate on the off chance I steal a mob from the tank...a stun in its face might save my life. I think I am going to end up going with Chilblains; most stun-able mobs are also slow-able, and I am thinking massive AoE slow will be more useful than a stun.

Unholy: More or less the same as Frost, especially because I will have Vile Spew, meaning I can slow everything within 40 yards to 50% speed for 30 Runic Power (and in Alterac Valley that might be the most fun thing ever).

PS: It has been raised that Vile Spew may sacrifice your Ghoul; I will look into this, and if it does, I may switch my preference for Unholy to Unholy Blight.

All images of talents taken from the Official Mists of Pandaria Talent Calculator. Located Here
Posted by Clockwork at 12:55 AM